CBBS successfully lobbied for the City of Umag (Croatia) to be awarded with the title “European Town of Sport 2018“ and for the Hungarian/Croatian partners to be awarded as “European Community of Sport 2018” (Croatian cities/municipalities: Belišće, Valpovo, Bizovac and Petrijevci and Hungarian cities: Siklos and Harkany), in the competition organized by European association ACES Europe (European Capitals of Sport) from Brussels.

ACES Europe and CBBS are working closely in order to bring the new candidates from Croatia/SE Europe interested to become European Capital/Cities/Towns/Communities of Sport and members of ACES Europe. 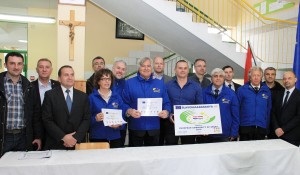 Berislav Čižmek, CEO of CBBS, management consulting and EU lobbying company from Zagreb, was a guest of honour at EU Business Talks organized on July 13, 2021 by GZS (Slovenian Chamber of Commerce and Industry) and was representing Croatian business community to the participants coming to the web EU Business Talks conference. Since Slovenia is holding the Presidency of the Council of the European Union in the second half of 2021 EU Business Talks were developed by GZS as the contribution by its part,

Berislav Čižmek, CEO of CBBS, management consulting and EU lobbying company, was very active in the #ETTClub activities for the recovery of the global event industry and was declared as one of the ambassadors for the ETT Journey for the reopening of the global exhibition industry. At the same time he was one of the founders of Event Thinkers Group that has been established by the event professionals coming from the countries all over the world.

CBBS successfully supported and lobbied for the Međimurje County to be awarded as first Croatian county with the title: “European Region of Sport 2022”, in the competition organized by European association ACES Europe (European Capitals and Cities of Sport Federation) from Brussels.

CBBS also supported City of Rijeka to be awarded as: „European City of Sport 2022“, in the category of the cities with more than 25 000 inhabitants.

The Global Association of the Exhibition Industry